New GOP Guidelines: How to Pretend You're Not in a Cult When You Are a Card-Carrying Member 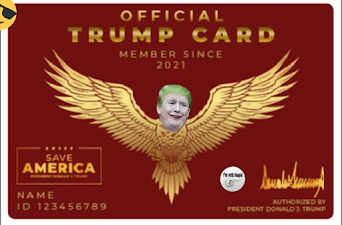 Right-wing politicians pretending they're patriots is nothing new.

However, Trump's minions - in and out of government - have taken the next step and are happily embracing a cult.

Cult - total devotion to one person or a religion regarded as unorthodox or spurious.

The common thread in all cults is a charismatic leader whose followers believe he/she can do no wrong. Enter Trump and MAGA.

Here's the tricky part. We have MAGA pols in the House and the Senate. They play a game where they tell people they are the one's protecting the Constitution.

In fact, with the backing of Trump judges right up to the Supreme Court, they are doing just the opposite. Crushing precedents that protect people's freedoms is just one example.

Like Jekyll and Hyde, these MAGA pols show the general public one face, and then turn around and show their other face to the base.

Republicans once known as the party of conservatives have slipped into a quagmire of conspiracies churned out by our former president since he lost the 2020 election. What's more they worship Trump with mindless devotion.

According to new GOP guidelines there's proper responses to feed the mainstream media. Some examples.

Reporter - "Did Trump lose the election?"

Trumpie - "It's debatable. There was so much fraud who can tell for sure?"

Reporter - "Who's the president of the United States?"

Trumpie - "Where are Hillary Clintons emails?"

Reporter - "Do you believe in Climate change?"

Trumpie - Hunter Biden should be charged for... (take your pick) Treason, Money Laundering, or being the son of President Joe Biden.

As it Stands, after considerable research I've been unable to locate where MAGA Membership cards are being printed. Footnote, put $20.00 down on China for me.