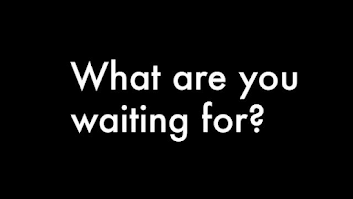 The world's optimists are waiting for a global kumbaya heralding universal Peace.

Americans are waiting for Trump to be held accountable for his numerous crimes and attempt to overthrow the 2020 election.

Humanity is waiting for cures for numerous deadly diseases like cancer.

Lawarence Ferlinghetti is still waiting for a rebirth of wonder.

Cartoon fans are still waiting for Willie J. Coyote to catch the roadrunner.

Animal and environmental activists are waiting for forests and animals to reclaim the earth as theirs.

Eric Trump is still waiting for his dad's approval.

Republicans are waiting to take the House of Representatives back so they can go on an extended revenge tour.

Quasi-Militias are waiting for the big day when anarchy breaks out in every state.

Legal eagles are waiting for the day that the Supreme Court justices will stop destroying precedent in our judicial system.

Millions of Americans are waiting for food and lodging that doesn't always come.

MAGA minions are eagerly waiting for Trump to declare he's running for president again in 2024.

Flat Earth devotees are waiting to fall off the edge of the planet and become stardust.

Foxes patiently wait for the chickens to come home before raiding their coops.

Monster hunters are still waiting to catch the elusive Bigfoot.

Fishermen are ready to wait all day to get a good catch.

Long lines of people don't mind waiting to get inside to see a live Broadway Play.

As it stands, I'm still waiting for the Great American novel to suddenly appear to me fully edited.