The Losers Guide to a Shadow Government 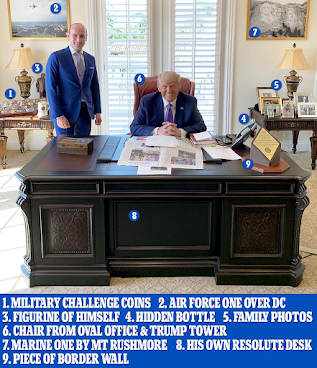 There is a shadow government in America.

It's located in Palm Beach, Florida.

It's run by the loser of the 2020 presidential election. He thinks he can defy reality.

Donald Trump, aka Don the Con, the Grifter-in-Chief, and Putin's lapdog, is the head of the newly created shadow government lodged in the bridal suite of his Mar-a-Lago resort.

News agencies and visitors have described Donny's special room as a mock Oval Office, right down to a duplicate Resolute desk. This elite seat of his quasi government/Republican Party is where an extremist goes to advance their career.

Be advised. It's not easy seeing his Highness. The first layer involves bribing some Trump associate for the pleasure of personally seeing the self-appointed kingmaker.

Then there's a matter of extreme credentials and proof of undying loyalty to Trump. Next what are you there for? Money? An endorsement? Both?

Once these layers are peeled away the supplicant gets to prostrate themselves in front of Stump's desk.

Then they're allowed to ask for money (whatever) while flattering the hell out of Thump and saying they've always been a bigly fan. The longer the asker stays on the ground the chance of having their request granted increases.

No one knows for sure how long this bridal suite was the center of Lump's make- believe presidency, but some suggest it was just before Kevin McCarthy flipped from telling the truth about the coup attempt to suddenly defending Trump and minions who tried to steal the election after he was summoned to appear before His Orangeness a week later.

I would warn morons going to see Hump for an endorsement that it'll be the kiss of death for their campaign.

Take a moment and check out this article that ran in The Atlantic titled, Trump's Endorsements Might Be the GOP's Kryptonite

One more reminder for the lost souls going to get cash from Donny; it's not going to turn out well for you based upon his history of throwing people under buses. You'd do better if you made a deal with the devil.