The Jan. 6 Committee Members Are Afraid of GOP Lawmakers 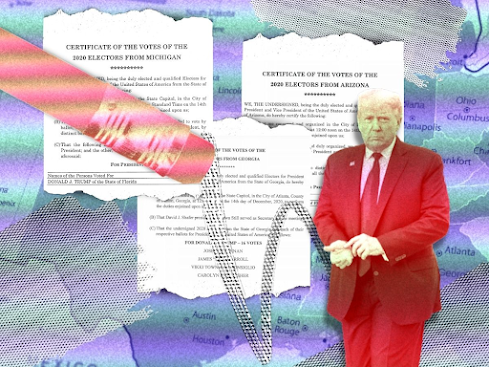 So much for going after the top-level coup plotters when it comes to uncovering the Jan. 6 attempt to overthrow a valid election.

What has become apparent in the last few months is the committee has a ton of evidence against GOP lawmakers participating in Trump's insurrection efforts, and it isn't going to charge them. Period.

I doubt they will recommend Trump be charged despite the fact he was the number one (and still is) instigator of the attempt to cripple our democracy.

The reason for this display of craven cowardice is political.

The Democrats are afraid they're going to lose in the midterms and the Republicans are going to take a terrible revenge by going after House members and Senate members that dared to speak truth about what happened on Jan. 6.

Just a thought, but do the Democrats really believe the GOP will have any legitimate grounds for charging their colleagues for any crimes?

The Democrats worry about setting a president for seeking justice when lawmakers go bad.

My reply to that weak narrative is if they don't, we can expect another (perhaps successful) assault on Democracy if the Republicans don't win the 2024 presidential election.

The thought of no real accountability for the biggest threat in the nation's history is simply disgusting.

It's disheartening to know millions of Americans are aware of how big a threat Trump and his minions are, and that no justice will come as they openly push the Big Lie.

There's only one path that may change this.

When the committee turns over their findings to the Department of Justice's Attorney General Merrick Garland, he sets up a special prosecutor to pursue the traitorous lawmakers who participated in trying to steal the 2020 election.

This tactic would take some of the pressure off the craven Democrats who could claim they only shared their findings and weren't responsible for penalizing their colleagues.

There's only one flaw that I can see.

Garland doesn't appoint a special investigator(s) to pursue those corrupt Congressmen, or he just decides the political fallout would be disastrous and let's Trump and his cronies off the hook.

Politics over our democratic government? That's a hell of a choice.

If that happens it'll be a fatal blow to our Republic. No consequences, no hope. Democracy will be so damaged that we'll sink into an authoritarian state in the next couple of years.