Let's Cut Through All of the Bulls**t: There's 3 Groups of People 'Above the Law' in America 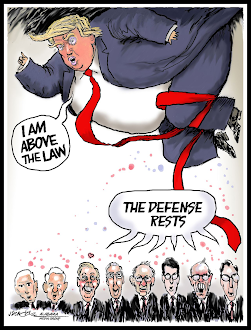 If there's one worn-out trope that bugs me it's the claim that "No one is above the law."

I don't know how anyone with eyes, ears and a functioning brain can claim such an absurd assumption.

The statement comes from a mythical past in America where all men were equal... despite the contrary reality of each generation.

Who is Above the Law in America?

Let's start with Supreme Court justices. They're appointed for life and accountable to no one. It baffles me why we ever gave them such unstoppable power.

The biggest ethical offender on today's court is Clarence Thomas, the senior associate justice who has ruled from his extreme conservative post for 30 years.

The House held a hearing on Supreme Court Ethics yesterday where they explored the relationship of his wife Ginni who worked with Trump and his minions to overthrow the duly elected president, Joe Biden.

Members examined Clarence Thomas's refusal to recuse himself from cases surrounding Jan. 6th, despite his wife's involvement in the attack.

Ginni Thomas has been a regular presence in conservative circles for decades, but Clarence never recused himself if she was involved in a case brought before his court.

I'll cut to the chase.

Don't bet on new ethical standards for corrupt judges, and don't think for a moment Clarence will be held accountable and impeached.

He is truly above the law.

The second group of Americans above the law are Congressional politicians. Over 100 Republicans participated (in one way or another) in the Jan. 6 riot, and still follow the Big Lie - Trump's alternative reality for his attempt to steal the election.

How many do you think will be held accountable for their treasonous attempt against the very foundation of our democracy? Nothing short of a miracle will make them accountable.

The Third group of Americans above the law are the wealthy. Americans have suspected as much since the Constitution was signed, but each generation likes to pretend the uber wealthy are all good Samaritans.

In fact, the super-rich still pull the strings of political power today. Billionaires and millionaires openly tout their political agendas with impunity. Kingmakers are a dime a dozen.

The scary part of this new generation of ultra-rich activists is they support sedition. It's so popular they pour their money into the coffers of the most extreme politicians and political activist groups actively seeking to overthrow our government.

Let's be real. Laws in this land are a guidepost to inequality. They only apply to someone outside of the three groups I mentioned here.