DeSantis Got His Election Police: His Political Opponents Better Beware

Prior to starting W.W. II Hitler appointed a special group to intimidate his political opponents.

They were called the SA, or Sturmabteilung, meaning "assault division." The group was also known as the Brownshirts or Storm Troopers. They paved the way for Hitler's takeover of Germany. 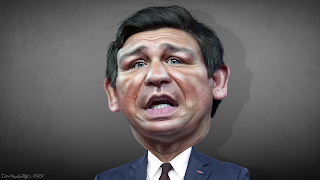 DeSantis has crowned himself the Ruler of Florida and is running roughshod over non-Republicans in the state. He even bullies his fellow Republicans that hold the legislative majorities in both houses.

The man who would be the next president of the United States in 2024 stands unopposed in his unconstitutional assaults on the Sunshine State.

His specialty has been cultivating cultural myths and conspiracies to please Trump's base. His new police force will be the next step towards voter suppression. He's already passed a redistricting bill to disenfranchise Black voters.

Having his own Brownshirts to harass Democrats, Independent voters, and politicians who run against him will give DeSantis another advantage beyond holding on to his current job.

With two more years of absolute authoritarian rule, he'll be in a better position to run for president in 2024.

No other state has created its own election police. However, Texas and Georgia may get inspired by DeSantis and try to get their own Storm Troopers.

It's no exaggeration to say America is moving toward becoming a Fascist government thanks to Trump, and his minions like Ron DeSantis.

I'm a baby boomer who's never seen a bigger threat to our Republic. It's no wonder that I have trouble sleeping at night. I don't know what I'm going to wake up to someday.

I'll close with this short story:

Philadelphia, 1787. The delegates to the Constitutional Convention are just leaving Independence Hall, having decided on the general structure for the new United States.

A crowd gathered on the steps of Independence Hall, eager to hear the news. A sturdy old woman (sometimes referred to as "an anxious lady"), wearing a shawl approached Benjamin Franklin and asked him, "Well, Doctor, what do we have, a republic or a monarchy?"

Franklin sagely replied, "a republic, if you can keep it."

What do you think America? Can we keep it?