I'm Not Sure Biden Should Go for a Second Term 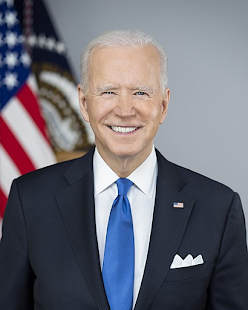 To be clear, I like President Joe Biden and I voted for him in 2020.

Setting that aside, I think Biden, at 78 years-old (and 80 in 2024) should consider stepping down and supporting a new Democratic candidate for president in 2024.

It's not that I think Biden is doing a bad job, it's his age that concerns me. He could be opposed by someone half his age. Make no mistake, he's accomplished a lot in just under two years.

*He appointed the first Black woman to the Supreme Court.

*He supported the CDC in the battle to get all Americans vaccinated against COVID-19 and relied on science (unlike the previous administration) to fight the deadly virus.

*He rejoined the Paris Climate Agreement after Trump dumped it.

*He got America out of the endless war in Afghanistan.

*By the end of 2021, 40 of Biden's appointed judges to the federal judiciary had been confirmed, more than any president in their first year in office since Ronald Regan.

He's united NATO for the first time in years to stand against a common enemy - Russia.

I could go on, but I think I made my point. Joe Biden is a good man whose done good things for America.

However, age is slowing him down. It's only natural. He's a low-key guy who'll never appear on The Masked Singer. But I suspect he'll do well enough in the next two years. Beyond that and it's a stretch.

I know the Democratic Party has already said Joe is going to run in 2024. They kind of had too. There is no other Democratic presidential candidate that currently looks like potential presidential material.

That is going to have to change soon. FYI - I don't believe vice president Kamala Harris is the answer. It's going to have to be someone with a lot of charisma to motivate younger voters and still entice the older generation.

Keep in mind Americans are increasingly voting for the most entertaining candidates and aren't too concerned about the fine details of running a government or understanding the Constitution.

Maybe voters ought to consider electing a comedian. Ukraine hasn't done too badly with their guy Zelenskyy who told jokes until he was elected to lead the country. Democrats better find someone soon... time is running out.