Goodbye Devin Nunes: No One Is Going to Miss You 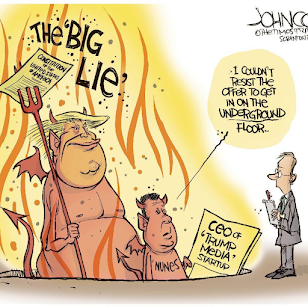 No more slinking around The White House and the Halls of Congress for Rep. Devin Nunes.

His foul stench will no longer pollute Congress because he quit the other day.

Just like that. I feel robbed. His departure should have been more dramatic, like seeing him criminally charged for his Russia coverups and plots with the defeated former president (and world class asshole) to protect Trump from his perch on the House Intelligence Committee.

He's been replaced by Rep. Mike Turner whose taken his position as the new top Republican on the committee.

So why did Nunes quit his job? Did he feel remorse for all of his lies and illegal actions he committed - as yet undiscovered?

I doubt that. For whatever reason he's decided to link his fate to a major loser. He's now the CEO of Trump's new media venture, which by the way, is mired in legal entanglements with a couple of government watchdog agencies.

And get this: Trump's business partner in the sleazy new venture is a Chinese investment firm that has a history of SEC investigations.

Related: Trump's Social Media Deal is Being Investigated by Regulators

I will take bets about the whole mess ever coming to fruition. Donny's not so good when it comes to start-ups, or any business ventures for that matter.

Reality has never been Nunes strong point. He enjoys being able to disseminate lies and the opportunity to spread more than ever was too tempting to pass up. The money probably cinched the deal.

Republicans were nice about his departure and made-up stories about what good he did as a member of Congress. Privately, most Republicans, including his replacement, were relieved to see the trouble-making asshole exit.

As for the Democrats, they all fondly wished Nunes the worst, while slamming the door on his fat ass!