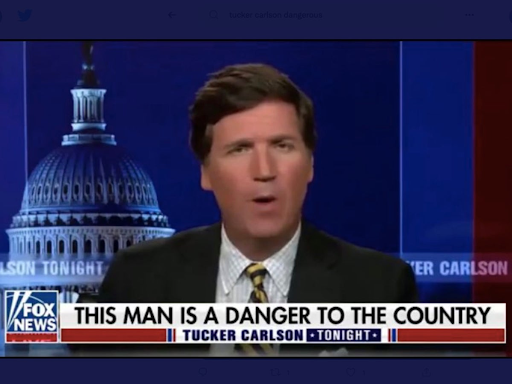 Fox News is where truth goes to die thanks to a foreigner who hates America, but loves making money here.

Rupert Murdoch has turned one of his dogs loose at Fox News in an all-out effort to discredit what happened on Jan. 6 when Trumpies stormed the Capitol.

The far-right host announced Thursday that, not only is he debuting a special Fox Nation docuseries promoting 1/6 trutherism, but he is making it his "first ever week-long event" starting Monday.

Carlson released a new trailer for the special week of programming that claimed he will expose "the lies" about the attack on the US Capitol. He hinted he will promote the notion that "other groups" were involved in the violence.

It's important to realize Murdock doesn't care about the incalculable damage he's doing to our democracy.

I shudder to think about the impact of a full week of outright poisonous lies that belong in the dark corners of the web, being shown on prime time TV.

Two GOP members of the 1/6 House Committee had this to say:

Liz Cheney, "Fox is allowing Carlson to spread the same type of lies that provoked violence on Jan. 6."

Adam Kinzinger, "Carlson spews lies and his network is committed to $$$ over truth."

Even Geraldo Rivera called the idea "...inflammatory and outrageous and uncorroborated."

The truly outrageous thing about letting Carlson goose ratings with the same lies Trump and his minions have been pushing, is not only is he going to get away with sharing alt-right information... people are going to tune in and watch it.

Therein lies the Constitutional crisis we're all living in. The polarization level is at critical mass now. What is Carlson's attack on reality going to spur? Another coup attempt?

It's something to watch for.