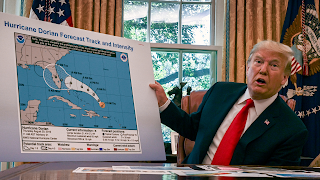 On September 1, 2019, as Hurricane Dorian approached the U.S. mainland Trump displayed his ignorance of weather conditions and tracking by using a Sharpie marker with his own prediction.

The former reality star altered the real forecast from the National Oceanic and Atmospheric Administration (NOAA) and claimed the tropical-force winds from Hurricane Dorian could impact Alabama. 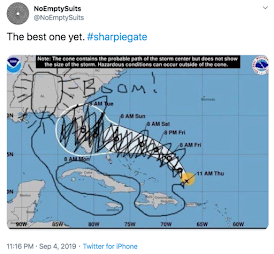 Reportedly he told his aides to obtain an official retraction from NOAA, supporting his version of the hurricane's path.

NOAA produced an unsigned letter in support of Trump's lie. Since then multiple agencies have investigated the possibility that political influence was exerted on NOAA.

Two reports were released in 2020. Both found political influence was a factor. Hurricane Dorian wasn't going anywhere near Alabama. In fact, it headed up the Atlantic coast.

The committees found that Neil Jacobs, the acting NOAA administrator and Julie Kay Roberts, the former NOAA deputy chief of staff and communications director, twice violated codes of the the agency's scientific policy.

There's a third investigation being done by a committee from the House of Representatives that has not been released yet. I think we all know what that committee will find.

The whole incident was met with scorn and mockery from the scientific community and the general population. Memes mocking Trump with his sharpie can still be found on the internet.

But, and this is where the wheels hit the road, Trump supporters backed his version (even though it never happened), thereby cementing a foundation for the cult's platform of science denial. 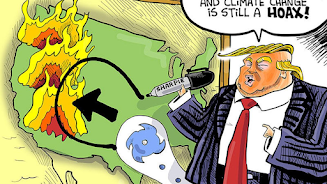 It's no surprise then that this one-man cult has embraced lies about climate change, and made it a mission to spread disinformation about the environmental disasters that plague the planet daily.

It's also no surprise that Trump minions won't get vaccinated in defiance of 98 percent of scientists in the world that have determined vaccines and safety measures (face masks for instance) are the best way to combat the virus.

This is one time however where the Trump faithful are literally dying for their master as they fill up hospitals in red states.

In the end, science catches up to the Trumpies who will still deny its existence right up until their last tortured gasp for oxygen.