'Tough Guy' Lindsey Graham Makes An Ass of Himself 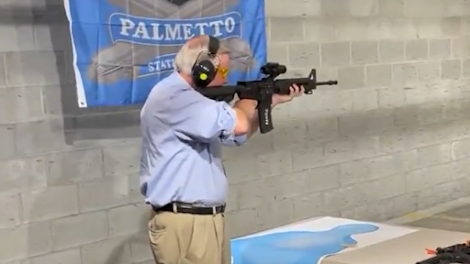 In a demonstration of how clueless Lindsey Graham is he touched off a fierce backlash from critics when he posted a video of himself shooting an AR-15.

This after several mass shootings with assault weapons last month. Not only is it pouring fuel on the fire about mass shootings in America...it was just a stupid thing to do.

Yesterday Graham posted a video of himself shooting an AR-15 with the caption; "I fired one of the weapons they are trying to ban."

Graham's stunt was like doing a photo-op with box cutters on an airplane after 911. Nothing says "tough guy" like wearing khakis and a first-trimester paunch.

Using the threat of an assault weapon ban Graham was hoping to normalize carrying around an assault rifle, and even claimed a ban years ago was worthless.

In fact gun massacres fell 37 percent in 1997 while the ban was in place, but rose by 183 percent after the ban expired.

Boldly declaring that if there was a natural disaster, Graham said his AR-15 will keep the marauding gangs of Hispanics away from his home.

He should be ashamed of himself, instead of bragging while people are mourning the losses of loved ones murdered with assault rifles.