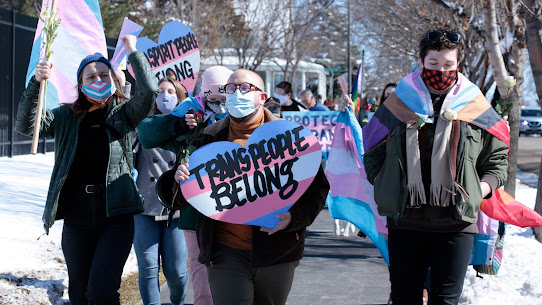 Republicans have to have segments of society to demonize in order to feed their vicious Trump-inspired followers.

If it isn't about immigration, then it's something else. Disenfranchising minorities continues to be a favorite way to exclude non-Republican voters.

The latest push to restrict trans girls from being able to participate in women's and girls school sports, has been gaining momentum lately.

For those who remember South Dakota Gov. Kristi Noem (and her gift of a model of Mt. Rushmore with Trump in it), it comes as no surprise she's in the vanguard of this suppression of human rights.

Yesterday she signed two executive bills that made sure trans girls would not have any rights to appeal. One for K-12 athletes, and another to to do so in college athletes.

Meanwhile LGBTQ+ advocates are deeply concerned about the Republican push for similar laws across the nation.

There's been 192 anti-LGBTQ+ bills scattered across the country since Biden took office.

Last week, Arkansas signed into law a ban on transgender women and girl's ability to compete in school sports.

Mississippi and North Dakota passed similar laws last month. The GOP's goal is to erase and exclude trans people from participation in all aspects of life. It's that simple... and evil.

The good news is there's resistance with organizations - and Democrats - fighting for trans rights.