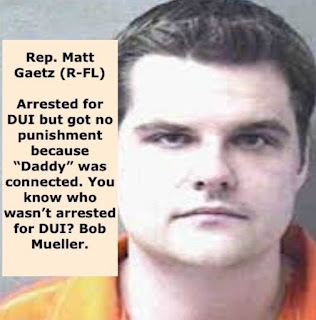 Known for applying his own facial makeup, Pretty Boy Matt Gaetz has had to double the amount this week to account for swollen eyes from bawling.

What has Gaetz crying and lying about an investigation on his activities?

The Department of Justice is looking at his illegal relationship with a 17-year old two years ago.

Turns out Gaetz's good buddy Joel Greenberg - a former county official in Florida who was arrested for sex trafficking of a minor last year - was part of a broader investigation by the DOJ.

Here's the interesting part, AG William Barr (a tried and true Trumpie) was the one who opened the investigations on Greenberg and Gaetz months before leaving office.

Any claims it was Democrats demonizing him are patently untrue.

Gaetz claims he, and his father, are being extorted by a former DOJ official - David McGee - with no evidence to support his accusation.

"It is completely false. It's a blatant attempt to distract from the fact that he's under investigation for sex trafficking of minors," McGee told the Washington Post.

Surprisingly FOX News host Tucker Carlson didn't blindly back Gaetz's claims. After the interview Carlson said it was "one of the weirdest" he's ever done.

That's because Gaetz was talking about a dinner he supposedly had two years ago with Carlson about his girlfriend at the time. Carlson simple couldn't recall the event.

I can't help wondering if QAnon nuts are following this because it's about sex trafficking - one of their favorite tropes. Instead of being a Democrat (the claim all along), it's a Republican under scrutiny for having sex with a minor.

What's really bugging Pretty Boy Gaetz is if he goes to prison, he won't be allowed to use facial makeup - which is probably a good thing in a men's prison.