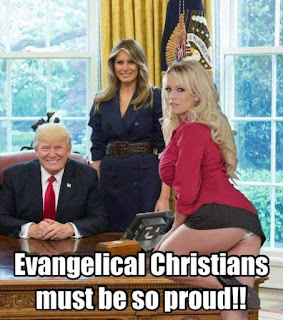 In 2016 Evangelical Christians lined up behind Trump and supported him as the "lesser of two evils."

The cost-benefit analysis that led them to follow Trump didn't factor in the long-term damage he, in fact, is still doing.

The consequences of undermining Christian witness have turned people who might have otherwise been receptive to a salvation message-to look else where for a path to redemption.

By cleaving to Trump the last four years, Evangelicals are finding themselves isolated in America's religious communities.

The only message that came from the four-year exodus from Jesus Christ's teachings is that Evangelicals are Republicans. Hardly a message of salvation for all.

We've all seen the negative repercussions that came with embracing the MAGA ethos.

Simply put, Trumpism has destroyed the Evangelical brand. It replaced their message with toxic politics. The risk they took in 2016 has not paid off.

With Trump as the de facto leader of Evangelical Christians, their future is in question.