A Rogue Supreme Court: Why H.R.1 Must Be Passed By The Senate 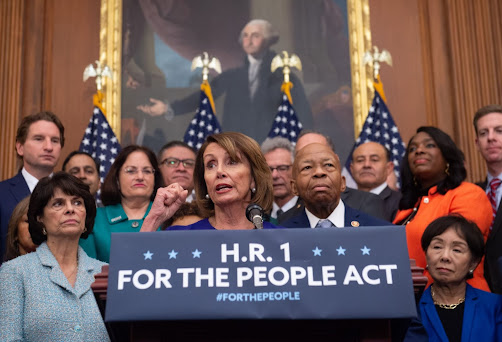 There was a time when the Supreme Court would have hesitated to enhance state latitude by enacting policies from new voter ID requirements to ensure they did not harm Blacks and other minority voters.

Those days are gone under Chief Justice Roberts. The Supreme Court today is busy hollowing out federal voting rights protection.

Since the Republicans losses in 2020, and lies about fraud from Trump, there's been a rash of states attempting to change voting laws to disenfranchise minority voters.

Georgia went all in and passed a spate of laws ensuring it's going to be hard for minorities to vote in the next election. They even went to ridiculous and draconian measures to outlaw people bringing food or drink to voting lines.

The problem is the now conservative court is giving states leeway over how they run elections, thus allowing partisans to weaken voting rights for minorities.

Led by Roberts, the court has also dismissed concerns about the consequences for minority voters as it curtailed the reach of the 1965 Voting Rights Act.

The signal the conservatives on the court have sent is they are willing to tolerate a lot of partisanship in how elections are run.

However, the Biden administration is not going to stand by and watch voting rights get diluted by extremist conservatives and a rogue Supreme Court.

Earlier this month the House passed the For The People Act, (H.R.1)which provides sweeping election reforms to protect voter's rights. The next step is the senate, where opposition from McConnell and his minions has already solidified.

Senate Republicans are warning they're going to filibuster H.R.1.

It's up to Biden to stand up and either shut down the filibuster, or change it to conform to past standards.

In my opinion, the Democrats are not going to pass any meaningful legislation unless they kill the filibuster.

I just don't want to see the same mistake the Obama administration made thinking the Republicans would compromise on legislations for the good of all Americans.

With the Supreme Court enabling conservatives to change voting laws to their advantage, H.R. 1 is the last chance to ensure future elections won't be rigged by the Republican Party.