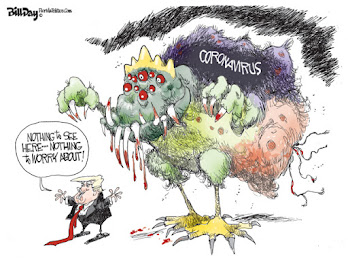 One year ago the first known exposure to the virus happened at Mar-a-Lago when Trump invited a Brazilian official to his resort.

The official posed for a photo next to Trump and attended a family birthday party. Since then the pandemic swept over the country like a toxic black cloud.

Remember the Trump White House? It had several outbreaks after flouting virus precautions by resisting mask-wearing and continuing to hold large events.

Who can forget the mass spreader rallies Trump put on while campaigning?

Is it any wonder then the virus has been following Trump around like a loyal dog being thrown scrapes of meat?

Trump's lies and distain have sustained the virus for over a year.

In January, Palm Beach County issued a warning to Mar-a-Lago's management after a New Year's party that violated an ordinance requiring employees and guests to wear masks.

Videos of the party went viral because of the blatant non-compliance during the last surge.

Since losing the 2020 election Trump has been holed up at his once "Winter White House," plotting revenge against the world.

His loyal virus has stayed with him right up until now. Mar-a-Lago is partly closed after staff members tested positive for the coronavirus.

An email sent to members said that service has been temporarily suspended in the club's dining room and its beach club because staff members have tested positive.

It's no secret Trump doesn't like dogs, but it may be news to some that he treats the coronavirus like a loyal pet.