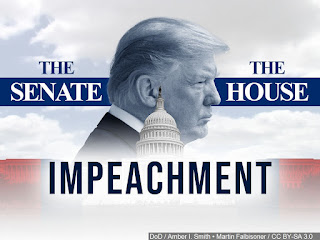 One impeachment wasn't enough for Trump.

Once again Trump is making history in the wrong way. No American president has ever been impeached twice.

It's only fitting. For the first time Republicans are distancing themselves from Trump. Mitch McConnell has let it be known he's pleased Trump is being impeached.

However, there's still Republicans in the House and Senate that don't want Trump impeached for a variety of weak reasons. The main one being they're afraid of Trump and his rabid followers.

As I listened to the procedures this morning it's apparent those stubborn GOP stooges are seizing on a false flag argument claiming it'll do more harm than good to impeach Trump's ass.

The cult of Trump runs deep as we hear stories of even police and fireman joining the assault on our capitol.

The toxic legacy of Trumpism is going to take a long time to overcome. He came close to destroying our democracy. The very least Congress can do is to impeach him... again.