The Game is Afoot! Four States Have Begun Early Voting 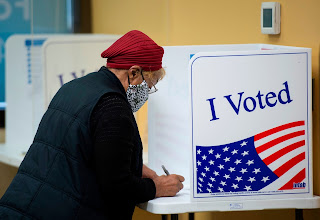 I confess to feeling nervous as we close in on the presidential election, but because voting is now underway in four states - Minnesota, South Dakota, Virginia and Wyoming - I'm feeling hopeful.

It appears my hope for an historic democratic voter turnout may not be a fool's dream. Long lines of people wearing masks and social distancing formed in all four states to cast their ballots. Political pundits are predicting that same scenario will happen throughout the nation as polls open early in the weeks ahead.

The thought that Trump voters would turn out in larger numbers at polling places has a basic flaw; fervent liberals will be turning out in massive numbers at the polls too.

In addition, they're more likely to vote by mail if they have underlining conditions than Republicans who could skip mail-in voting because Trump told them the process was a fraud.

In an effort to sabotage mail-in voting Trump appointed a political donor to run down the USPS. That scoundrel, Louis DeJoy, is now being investigated for several reasons. A federal judge ruled yesterday that "The Trump Administration was involved in a politically-motivated attack on the efficiency of the postal service."

In the ruling DeJoy was ordered to restore the machinery that was dismantled to slow the system down. His toxic policies of no overtime, trucks leaving at certain times (whether full or not), and not fulfilling their mandate to get mail out in a timely manner because of artificial obstructions, were ordered to stop. Congress still needs to hold him to task for corruption in two different cases related to the USPS.

One of those four states that began voting yesterday had two visitors; Joe Biden and Trump. The game is truly afoot!

Quote for the Day: "Every election is determined by the people who show up." -Larry J. Sabato