Lord of the Lies: Trump Unchained From Reality 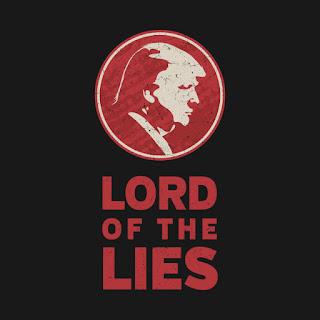 In Trump's world a lie is very useful.

When someone fact checks his lies, they're repeating them.

That's a win, in his twisted worldview.

Lying about COVID-19's deadly impact and denying the science of face masks has caused hundreds of thousands of lives.

LORD of the LIES

Fact checking sites agree that Trump has told at least 20,000 lies since slithering into office on January 20th, 2017.

We learned from Bob Woodward's tapes that we need to pay less attention to Trump's shameless lies and far more attention to the things he's lying about.

A sign of how far we've sunk as a civil society is the reverence once attached to "Honest Abe" has dissolved. Peoples acceptance of the biggest liar ever to hold the office of the presidency is disintegrating the values and morals this nation was built on.

Trump's fusillades against his enemies, domestic and abroad, are rants against reality. By now, everyone in the world knows that. Trump's reputation as a world class liar has caused our allies to back away from our turbulent government.

Supposedly master of the Art of the Deal (a book of fiction written by a ghost writer who needed the money), Trump has proven to be the Master of the Steal. It's going to take years to total how many millions he's stolen off taxpayers.

The United States faces a daunting challenge having an insane president desperately trying to hold onto his power by whatever means possible.

Trump's even sacrificing his own followers by holding increasingly large supper spreader rallies where attendees go without wearing masks and ignoring social distancing.

Trump wants his base to vote for him. He could care less about their safety. Loyal supporters that catch the coronavirus and die aren't going to make Trump cry. They're just easily manipulated pawns.

**Manufacturing jobs have not returned from China.

**Student debt continues to cripple the prospects of the next generation.

**Trump was unable to overturn Obamacare and put in a new health system so he attempted to get rid of a pre-existing conditions clause in the Affordable Care Act.

**The Great Wall of Trump turned out to be about five miles of New Wall. A couple of hundred miles were repaired and Mexico didn't pay for it.

**He didn't Make America Great. He did turn the country into a battlefield of red-and-blue states. He flaunted his contempt for the rule of law, and installed corrupt cronies loyal only to him - and not the country.

Quote for the Day: "It is sometimes an appropriate response to reality to go insane." -Philip K. Dick