Commission on Presidential Debates Should Be Ready for Trump Next Time 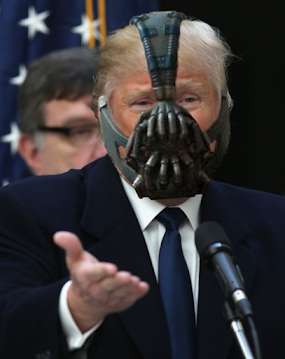 Short of putting a Hannibal Lecter style facemask on Trump when it's not his turn to speak, debate organizers had to come up with a way to muzzle him when he interrupts Biden, and the Moderator during the next debate.

No sane American wants to see another performance like the last debate.

It's going to take a long time for the rest of the world to stop laughing...and to stop worrying about about the fate of Democracy in America after that humiliating performance.

The debate event organizers should institute a "kill the mike policy" when Trump won't shut up in the next round. There's already talk of that and we should know the results tomorrow.

The commission is trying to ensure an "orderly discussion" for the next round. I wish them the best.

I realize Trump will just talk louder when he's disconnected. There's probably a good chance he'll throw one of his famous tantrums the first time the mike goes silent amid his ranting.

That's okay. Undecided voters won't have any trouble making up their minds after another disastrous debate displaying Trump's ignorance and blatant racism. If there are any undecided voters still wandering around in the hinterlands.

I suspect they're as rare as unicorns.

It's sad that the only way to go forward is for the organizers to make necessary changes because Trump's camp would never allow any restrictions on his antics. That would be taking baby Donny's rattle away, and that'll never happen.

These are not normal times. Long-held traditions have been trashed. Morality and civility are just two of the causalities in our society during the Trump regime.

Truth is the biggest causality as a president who lives in an alternate reality refuting facts from experts, whether scientists or doctors, squats in the Oval Office.

Trump the grifter pulled off a long con (with the help of the Russians) in 2016 that's nearly brought our republic to ruins in the short period of three years, and eight months.

The Russians are back again, following Trump's lead to discredit our electoral process. The very foundation of a free nation is in jeopardy.

We must vote Trump out of office, and begin healing the country that he's divided so deeply. Vote for Joe Biden, and you'll be voting for America's future.

Quote for the Day: Authoritarian political ideologies have a vested interest in promoting fear, a sense of the imminence of take over by aliens and real diseases are useful materials." -Susan Sontag