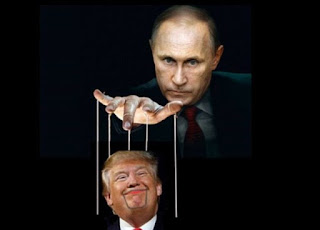 Yesterday morning the so-called "Gang of Eight" in Congress met for a classified hearing on Russia putting bounties on American servicemen and women in Afghanistan.

No one walked out of that briefing smiling. Republicans and Democrats were concerned about what they heard. More information has come out today further verifying money transactions between the Taliban and Russian GRU goons. Money handlers who acted as middlemen have been identified.

The question is, what the hell is congress going to do about it?

If it's true that Trump wasn't briefed on such an incendiary subject then the rumors are true - his minions were afraid to tell him anything bad about Putin and Russia. Why?

Like Nancy Pelosi has said repeatedly, "With Trump, all roads point to Putin."  After three and a half years nothing has changed; Putin must have something on Trump. It's the only explanation for him taking Putin's word over his own intelligence community repeatedly.

I'm hoping that we find out who was behind shielding Trump from unpleasant news about his dictator buddies. I suspect more than one person was involved. News reports state the CIA agent that brought Trump his daily reports may be a sacrificial lamb in this drama.

Somebody has to take some blame. I know Trump won't. I also wouldn't be surprised if the bastard has known about this hit list against our military since last year when intelligence reports were trickling in.
On the Homefront - Medford Oregon This is a screen shot by the store surveillance camera.
"Bad Boys! Bad boys! What cha going to do when they come get you?"

The photo above is one embarrassing moment for local cops.
Not one of the officers is wearing a face mask...despite the governor's mandate to wear them inside and out. Moments after this photo was taken, three more officer's walked in with no face masks on.

The interchange between the store's assistant manager and the first cop who walked in (shown above) without a face mask was stunning! He told the trooper that he needed to wear a mask. What came next really blew my mind...

"Governor Brown has no authority to take away our civil liberties. We aren't going to wear face masks," he shot back at the assistant manager. The idiot trooper then placed his order and said, "Fuck, Kate Brown!"

Sure glad this was recorded with good audio. This incident came the day the face mask mandate went out.

It's this kind of ignorance that is causing the current wave of COVID-19 spread across the nation. The asshole was worried about his civil liberties while taking others rights away to live safely by possibly infecting them.

How the fuck are we going to get through this pandemic with morons like this everywhere???

Quote for the Day; "The search for a scapegoat is the easiest of all hunting expeditions." Dwight Eisenhower
at July 03, 2020