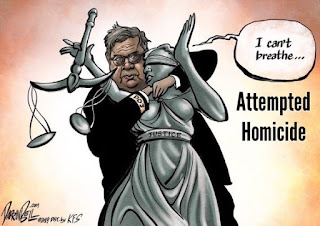 Without question, Trump is the most dangerous man in America (arguably the planet).

The second most dangerous man in America is AG Bill Barr, whose slavish devotion to Trump the Divider is demonstrated daily.

Much of what Trump has gotten away with can be traced to Barr's assistance in subverting laws and norms in Washington. The fact that Barr believes in an imperial presidency has forged their relationship in a sea of lies corruption.

In one of his most recent assaults on justice, Barr forced the top federal prosecutor in Manhattan to resign so he could put Trump's golfing buddy in charge.

It gets worse. Geoffrey Berman, the man Barr rooted out of his position as a U.S. Attorney was handling some sensitive cases involving Trump and two of his favorite puppets, Rudy Giuliani, and Roger Stone.

Just another clear case of Barr carrying Trump's water. He is the orange ape's fixer, and has been since getting confirmed on a partisan vote.

Update: Berman will be testifying next week (July 9th) before the House Judiciary Committee about why he was forced out. It's too bad that it's a closed-door interview. I would have liked to hear that exchange.

Further on down the road, on July 28th, Barr's fat ass is scheduled to appear before that same House Judiciary Committee. This hearing will come on the heels of two Justice Department prosecutors testifying about illegal interference in sensitive cases, including in the prosecution of Roger Stone.

My guess is Barr will stonewall Congress again. Just like last time, which was a total farce and a waste of everyone's time. 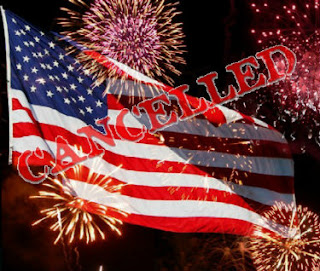 Canceling 4th of July
Health officials said that Oregonians should "absolutely" cancel 4th of July plans because of the surge of coronavirus cases.

There's been 375 new cases overnight, a record for the second day in a row. The state's positivity rate is 4.6 percent and climbing. We now have nearly 10,000 confirmed coronavirus cases and 209 deaths. Like the rest of the country were going the wrong way... up!

Quote for the Day; "The most dangerous, poisonous and ferocious animals are humans." -Amit Abraham
at July 04, 2020