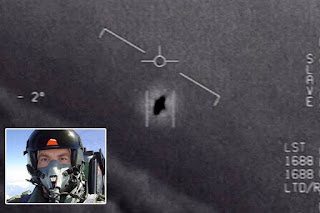 There's been reports of UFOs flying over Washington DC since the 1950s.

In fact, UFO fever spread across America in July 1952 when the grandfather of all saucer sightings took place in the skies above the nation's capitol.

Jaws dropped across the country as Americans tried to process the possibility of alien beings buzzing the White House.

Up to a dozen unexplained objects streaked across the skies for several weeks over Washington D.C. The sightings came from radar operators, professional pilots and other highly credible witnesses.

At one point the Air Force scrambled fighter jets, but the 'saucers' outran them. A wily Harry Truman quietly put together an investigation team headed up by the Air Force that became... wait for it...
Project Blue Book.


Why am I writing about shiny objects flying over the White House?

One. For the first time our government has openly admitted alien space craft were confirmed by Air Force pilots and ground crews.

Two. The latest Trumpian reports of bright and shiny objects (other than UFOs) over the White House haven't been about aliens... they're diversions concocted by his warped mind and launched by his cronies under his orders.

Trump is in full campaign mode doing his best to divert away from his abysmal handling of the pandemic and other scandals that are stacking up lately.

News of the Day - Trump fires IG investigating his puppet Pompeo for secret Saudi deal. Brags there'll be more watchdogs to take out. The score is four in the last month.

Trump tells press he's been taking hydroxychloroquine to fight COVID-19 for nearly two weeks causing the medical community (CDC and more) to issue warnings to the public NOT to do what Trump claims he's doing (it's still a matter of speculation if he really is taking the controversial malaria drug).

It's Obamagate time! Trump loves pulling Obama out of his bag of tricks and lies, and throwing him out to a base that still need racist attacks to stay engaged.

Some of the shiny objects streaking over the White House are smaller than others.

His daily dose of distractions are like flak over Washington DC., fending off facts that struggle to emerge about his administration.

On the Homefront - Medford, Oregon
**A Baker County judge ruled that Gov. Kate Brown's restrictions on religious gatherings were "null and void" yesterday because her emergency order amid the coronavirus pandemic had exceeded its 28-day limit.

But, the ruling was put on hold by the Oregon Supreme Court late last night. I'll be interesting to see what the court decides in this controversial issue that's played across the country in recent weeks.

**Here comes the judge...again - Yesterday, a federal judge denied an emergency injunction for a coalition of nine businesses and one non-profit that last week sued Gov. Brown, alleging her emergency stay-at-home orders amid the coronavirus pandemic violated their constitutional rights and were politically motivated.

It's nice to see not all the nuts are getting their way about ignoring the health risks in our country.