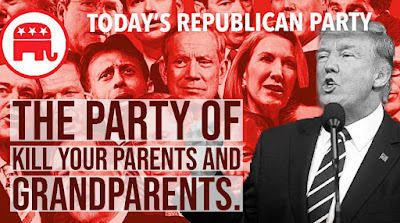 It was just a matter of time.

It looks like Trump is phasing out Dr. Fauci (the only non-political healthcare expert on his Coronavirus Task Farce).

Word is he's jealous of all the attention Dr. Fauci has been getting. Coupled with his concern over the economy, Trump's biggest worry is getting re-elected.

Keeping Americans safe from the pandemic is a low priority item for the Narcissist in Charge. He wants to jumpstart the economy by sacrificing human lives.

In one of his daily displays of stupidity, Trump promised the economy would come back on Easter. Shades of the "Chosen One."

Dr. Fauci - as well as virtually every other medical professional in the country - has been explicit the current social distancing measures need to be kept in place beyond Easter.

He's even hinted the restrictions might even need tightening (in the next few weeks) in order to curtail the spread of the coronavirus.

It's easy to see what's happening with Trump. He can't ignore reality right now, and it's pissing him off!

My biggest concern is that Trump overrules the experts advise on social distancing to rev up the economy to the determent of every senior citizen and person with immunity problems in America.

What did this country do to deserve such a profoundly flawed human being?

**Netflix and YouTube are slowing down in Europe to keep the internet from breaking. I'm wondering when (or if) the USA will go the same way?

**A lot of people are ignoring social distancing throughout the country according to news reports. I attribute that to our stubborn independent streak that is more concerned with freedom of movement than safety.

**Jerry Falwell Jr., a political hack and President of Liberty University, proved that he's a Trump puppet once again.

He welcomed 1,100 students back from spring break, greeting many with handshakes, and joking about how they "pretty much had the run of the place to themselves."

This happened the same day Virginia Gov. Ralph Northam announced that all K-12 schools in the state would remain closed for the rest of the year. Northam, who is a doctor, said the closures were necessary to slow the spread of the virus.

On the Homefront in Medford, Oregon

**Nearly one out of 20 visits to an Oregon emergency department during the last week has involved a patient with COVID-19- like symptoms, according to data from the Oregon Health Authority.

It's probably because of lack of testing that Oregon looks almost unaffected by the pandemic. We'll see in the weeks ahead.

**Our hot tub broke down. This was a cause of great concern for Shirley and I, because we often use it to relieve our arthritis symptoms.

The good news was it was still under guarantee (until May) and the new pump isn't costing us anything. Of course there's the very real possibility we won't get it for months with the currently strained supply lines.

Thus far, my spirits have been good. I'm optimistic things will get better... down the road.
at March 25, 2020