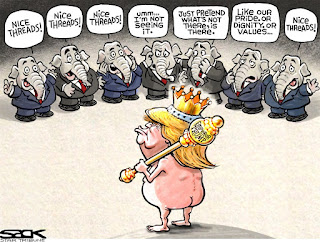 What has clearly emerged since I started this diary is an affirmation on how Trump supporters resist reality.

Not even a pandemic, killing Americans off in greater numbers every day, seems able to pierce the fog of stupidity and greed of Trump followers who want to open up the country and pretend this deadly virus will just magically go away.

It's a defining moment in our history.

Fact versus fiction in fighting the greatest challenge America has faced in over 100 years. It's basically up to the governors of each state to take the proper emergency measures with no leadership coming from Trump.

Sadly, there's several Republican governors in the south that agree with Trump, and are trying to ignite their economies by not closing most businesses at the risk of public safety.

The head of the Federal Reserve, Jerome Powell, confirmed that we are in a recession now, and that it will continue until the coronavirus challenges have been solved.

**Crazy things are happening. Some moron went into a Pennsylvania grocery store and walked through the produce and meat aisles purposely coughing on the food! She was arrested and is being tested for COVID-19.

**The upcoming election almost seems like it's on the back burner. Almost...

**Nurses and doctors wearing trash bags for protection because they ran out of the proper medical supplies.

**I've read numerous reports on how pollution has gone down over major industrial cities/countries across the planet. It's an odd way of improving global warming though carbon reduction.


On the Homefront - Medford Oregon

**Some Oregonians are swarming stores for home improvment projects, ignoring the stay-at home order. It's something that Shirley and have been guilty of...once.

Our excuse (and you knew I would find one) is that the store we went to, Lowe's, was open. "We came, we saw, and shopped!"

The store was practicing social distancing, and had disinfection stations scattered around. Local authorties don't seem to mind this little reality. That could change if things get worse however.

**I can't help wondering if things will get worse here. Thus far, there have been 78 cases of coronavirus in Oregon since Feb. 28th (latest figures available). Over 266 cases reported statewide. And, 11 deaths.

**Sign of the times... gotta love it. Out-of-work strippers in this area are delivering food, the service is called Boober Eats! Forget it...I'm not even going there!

**Pet update. I'm thinking of running pics of our precious pets. They're always good for a laugh, and all of them are beyond cute! We have two dogs and three cats.

As long as I don't spend too much time thinking about Trump and what he's doing to this country, I'm okay. Being homebound is no problem for me, as I normally lead a hermit-like existense.
at March 27, 2020