In a Time of Universal Lies... Telling the Truth is Revolutionary 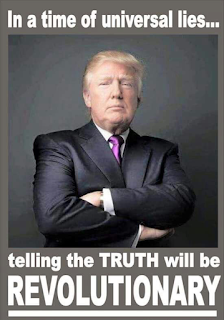 Trump, our divider in chief, is on a constant mission to debunk the truth, wherever he finds it.

He's sick of it surfacing and embarrassing him.

When the truth doesn't suit Trump (95 percent of the time) he tracks it down like a big game hunter, and attacks it.

The most recent example was when all 17 intelligence agencies concluded that the Russians were currently attacking our electoral system to help get Trump reelected.

When Trump was told about the House Intelligence Committee briefing that confirmed the Russians were out to help him get reelected, he flipped his hair piece!

Like a naughty 3rd grader hoping to get his teacher in trouble, Rep. Devin Nunes ran to Trump right after the briefing was over and reported the intel community was sharing the truth. That was intolerable news for the First Narcissist.

Trump exploded at Joseph Maguire, a veteran intelligence operative who was the current acting DNI after Nunes squealed that a Maguire deputy told a bipartisan congressional committee, including Trump's arch nemesis, Adam Schiff, that Russia was back at it again - pushing Trump's re-election.

Wasting no time, Trump fired Maguire and put in one of his puppets, Richard Grenell to stop anymore truths from leaking out.

In a full court press against truth and transparency in his administration, another Trump puppet, John McEntee, his former bodyguard who was elevated to run the presidential personnel office, was instructed to root out anyone that was disloyal to Trump - in other words - truth talkers.

Regardless of Trump's attempts at suppressing the truth it always has a way of coming out. Sometimes right away, or later when it's not expected.

The truth will always be Trump's enemy... and must always be used to combat his fake news and outright lies.