Only In The Trump Era: 2 Leaders Indicted For Corruption Meet At WH To Announce Middle East Peace Plan 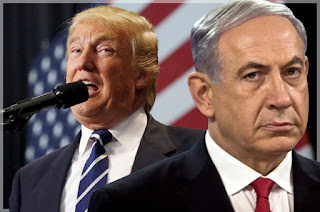 More proof we're living during a dark period in America's history, the Trump era, was on display yesterday:

The White House meeting between Trump and Netanyahu, while both are being tried for corruption, was surreal scene.

Viewers watched as Trump unveiled a one-sided plan (no Palestinian involvement) with absolutely no chance of solving anything, and claim it was an "historic moment."

It took less than three hours for Palestinian leader Mahmoud Abbas to respond to the announcement declaring the "plan was dead upon arrival."

It was a pathetic attempt by two deeply corrupt world leaders to divert attention away from their trials. Otherwise, why would Trump and his minions announce a contrived "Vision" right in the middle of his trial?

There was no break in the stalemate between Israel and the Palestinians to ballyhoo. The two sides aren't even communicating. 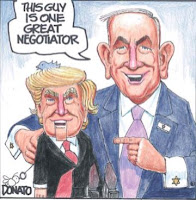 Trump's defense team speaking during his senate impeachment trial while he and Netanyahu are in the White House trying to prop each other up with a bullshit announcement.

Every American knows these are not normal times. Every tradition in our society and government has been polluted by Trump's toxic speech and policies.

That Trump is a serial liar who is still defended by Trumplicans (use to be Republicans) is obvious to all Americans, and the rest of the world.

However, in the deeply divided political chaos that Trump's reign has created it's permissible to live in an alternate universe where facts fight fiction/lies daily.

I agree with Trump's assessment of the day being historic... but for a different reason...

It's doubtful we'll ever see another impeached American president fighting for survival in a senate trial, meet with another world leader indicted for corruption at the White House, to announce a bogus peace plan...

(Scary Thought: Unless Trump gets re-elected!)