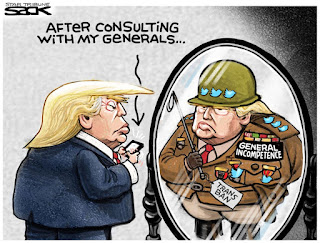 Among Trump's many stupid statements since slithering into office, is that he knows more than all of his generals when it comes to ISIS.

As a matter of record, Trump claims to know how to do anything better than anyone. The few adults that were once in Trump's administration are long gone. Driven out, or by resigning in disgust like John Bolton.Trump's taken charge of all Foreign Affairs.

The results are hardly surprising:

*The Ukraine scandal - got him impeached. A senate trial to acquit or convict soon.

**Selling out our allies the Kurds, to Turkey's dictator. Effectively destabilizing the Middle East.

**Bringing America to the brink of war with Iran this week by assassinating their top general.

**Effectively defying NATO members on Iran nuke deal signed in 2015, even though the U.S. was an original signatory.

How often do we hear about Trump's foreign policy?
When has he ever laid out a foreign policy strategy to Congress, the Senate, and the people who elected his fat ass?

I'll answer both of them. Never, and never.

Who needs a damn foreign policy when Trump can just go by his amble gut and change it daily? The Republicans on Capitol Hill seem okay with his fly-by-the-diaper decision-making process, regardless of the consequences.

Trump's drone attack on a revered Iranian leader has united the people -who were starting to protest the regime's policies - and assured the region of continuing conflict as they seek revenge against "The Great Satan (Trump calls himself the Chosen One)."

Currently, all Americans have been alerted to the possibility of Iranian computer intrusions attacking our infrastructure. Thousands of new troops have been sent to the Middle East which is now on a war standing with an uneasy, unwritten, truce.

No one knows what will happen next. Just the way Trump likes it. Total chaos.