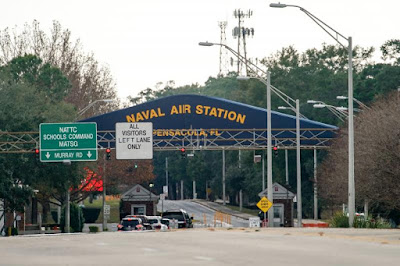 The realization that a foreign terrorist targeted a US military base and successfully murdered and wounded American service members, opens up a new front in the battle against worldwide terrorism.

As new facts about the Saudi student who committed the atrocity continue to leak out one thing is clear... this was a premediated attack and more than one person is involved.

The Associated Press reported the killer hosted a dinner party before his murderous attack where he, and three other Saudi students, watched videos of mass shootings.

We know that one of those students who were at the party was videotaped outside the building where the shooting was taking place at Naval Air Station Pennsacola.

The other two students watched from a car. Authorities have arrested them, and at last report, they were holding ten Saudi students for questioning. Apparently, several Saudi students are still missing according to officials (at the time of this post).

We also know the shooter posted criticism of US wars and quoted Osama bin Laden on social media before opening fire on his unsuspecting victims.

Too many questions remain

** Was it a conspiracy involving some - if not all of the Saudi students?

** How effective is the vetting process - both from the Saudis side. and the US side?

** How did the killer get a handgun into a secure base that prohibits anyone, with the exception of the base police force, from having weapons?

** Just how closely are foreign students being monitored while they're here training at our military bases?

** Is it time to re-examine the training programs between other countries military, and ours?

** Should we ban some countries from training programs when we know they're bad actors, or even suspect it?

While the Saudi government (and Trump) were quick to decry the act, it sounds similar to the insincere effort made to help find out who murdered Washington Post columnist Jamal Khashoggi.

No one, but Trump (who could care less), thinks the Saudi's ever came clean on that brutal assassination. Thus, their offer now sounds just as hollow.

Watching Trump get in front of this mass shooting is reminiscent of the ploy Trump used to discredit the Mueller investigation.

The last thing Trump wants is to lose his personal good standing with The Kingdom, who he plans to do more business with again in the future.