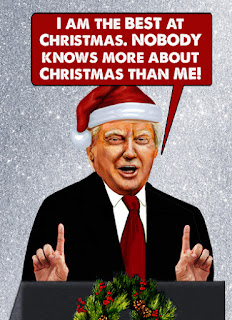 I'm going to go out on a limb (spruce for the season) and say Christmas cards are probably on the way today.

People are sending greetings to family and friends wishing them happy holidays.

I think the tradition began when Martha Washington sent George a long letter in a card while he was at Valley Forge. The card read: "Warmest Christmas Greetings," which he thankfully used to start a bonfire.

All right...I'm just kidding. He really used it to wipe his butt because of a serious shortage of toilet paper!

I'm going to be serious for a moment.

While Americans are sending each other holiday greetings, Trump and his minions have sent out memos to 2 million federal employees informing them they can't talk about impeaching Trump or about resisting his corruption.

According to an interview with the NY Times,Cathleen Clark, a law professor at Washington University, said this:


“This goes beyond past guidance about what partisan political activity is and is more restrictive of speech of federal employees than past guidance that I’ve been able to find.
“I think their legal analysis is wrong in this attempt to outlaw all discussion of impeachment of Trump in the federal workplace."
Just the White House's way of saying the First Amendment doesn't apply to federal workers. Wrong. Again.
Christmas Cards I'd Like To See
1) front of the card - A picture of Mueller dressed up like Santa Claus with a cage (instead of a bag of presents) on his sleigh...inside reads;
"Ho! Ho! Ho! Off To Jail We Go!"
2) Front - Illustration of Grinch/Trump character in a sleigh pulled by Sarah Huckabee Sanders and Kellyanne Conway with reindeer horns on their heads.
Inside -  "Yuge Christmas Greetings from the White House Liar's Club!"
3.) Front - Republican Congressmen (and women) dressed up like biblical characters, kneeling with outstretched hands toward a golden idol of Trump.
Inside: "Good News! Trump Has Risen and If You Want To be Wealthy Donate To His 2020 Campaign!"
Have you started mailing out your holiday greeting cards yet? Support the USPS, and wish someone the very best this season.
Time for me to walk on down the road...
at December 01, 2018