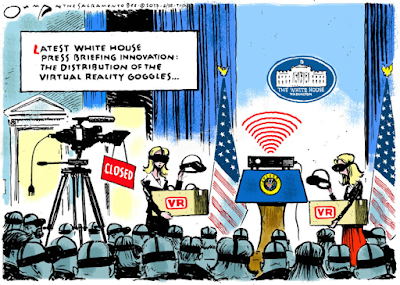 Those folks in the Trump propaganda wing are talking to the press again.

In the first White House press briefing in a month, a new tactic was rolled out to give Sarah Sanders a minimal contact with reporters.

Mission Statement: With less time to lie, Sanders won't get attacked as often.

New Rules of Engagement: let other Trump minions (perhaps with harder shells) use up nearly all the allotted time. Using this new strategy, Larry Kudlow and John Bolton appeared and sucked all of the oxygen out of the room.

Kudlow's manner of speaking was slow and measured, eating up the minutes repeating himself. Bolton, true to form, acted like an asshole and screwed with reporters when asked if he heard the Jamal Kashoggi murder tape.

When Sanders did appear she launched into her normal lying mode. For example she claimed Trump cared about clean air even after he lowered omission standards.

When confronted with Trump's denial of the results of a four-year multi-government environmental study, Sanders said it didn't have enough facts and that's why Trump is not going to talk about it during the upcoming G-20 Summit.

She finished up with a flurry of "You'll have to ask (fill in blank)," "The president's position is crystal clear (she always pulls that one out when Trump's position is anything BUT clear), and a serious of denials.

When Sanders was asked about Trump's tweet (Get ready Russia, because they will be coming, nice and new and 'smart!) yesterday morning - in response to Russia's seizure of three Ukrainian ships - she did her usual denial dance replying;

"Again, the President has not laid out a timetable and is still leaving a number of other options on the table. And we're still considering a number of those, and a final decision on that front hasn't been made."

The orange anus is still considering his options with what to do about his buddy (and fellow authoritarian) bin Salman's ruthless murder of an American journalist for the Washington Post.

I did notice something that no one else seems to be talking about...

Reporters asked follow-up questions - which (correct me if I'm wrong) was not supposed to be allowed anymore under new White House Press briefing rules, following Trump's embarrassment by the courts for trying to violate reporter Jim Acosta's Fifth Amendment.

Gee...I wonder what happened to those new rules? I'm going to go out on a limb and say the press pool won't play that game...and they knew it.