Memo To Trump: There is NO Good Day to Shut Down the Government

"Hokahey, today is a good day to die!" - Crazy Horse 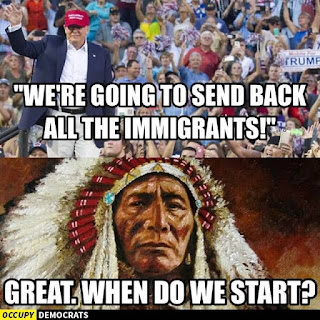 According to our liar in chief, "It's a good time to shut down the government."

Our pathetic POTUS's reason; he wants more money for the wall.

The money he's already extorted (over one billion) hasn't been used yet, with the exception of some repairs.

Trump also doubled-down by threatening that the 5,900 U.S. military troops on our southern border may have to stay beyond the mission completion day of December 15th.

Commenting on these troops Saturday, Trump said, "They build great fences. They built a very powerful fence, a different kind of fence, but very powerful. The fence is fully manned."

Tell me, after reading his quote what did it sound like to you?

A) A kindergartener talking about fences.
B) A first graders first attempt at writing sentences.
C) A racist Dr. Seuss.

Note: the active military troops are almost done with their mission of putting up barbed wire barriers. After that, it looks like they get to sit there and miss out on the holidays as Trump plays Grinch early in the season.

The fact that Trump's God-complex is no secret anymore, just adds to the indignities millions of Americans are experiencing under his corrupt regime.

Trump's not even pretending to serve all Americans anymore. Instead, he's chosen to play to his repulsive base at every opportunity.

The orange-skinned ape's playbook doesn't have a lot of big words in it: