Tip of the Iceberg: Factory Workers Already Losing Jobs Thanks To Tariffs 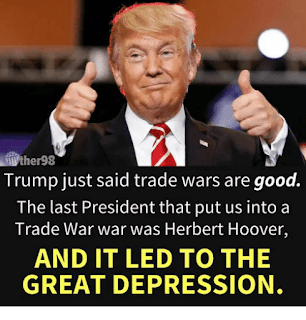 Any economist in the nation will tell you a tariff war is not a good thing.

But Donny thinks it'll be easy, and the world will capitulate to him, and he'll be a hero to his base.

However, it's not so easy for American companies. Look how it put the biggest nail maker in the nation in a crisis mode.


A factory in Missouri had to lay off dozens of workers due to lost business from cancelled customer orders.
At the MidContinent Steel and Wire plant in Poplar Bluff, Missouri, where Magnum Fasteners products are made, 60 employees were laid off this month as certain operations were idled due to lost business from increased steel costs.
"The imposition of these tariffs on our raw materials on June 1st has actually put our operations into a crisis mode," operations general manager Chris Pratt told reporters at KFVS News yesterday.
This is how Trump repays his loyal supporters. His version of making America great again only applies to the wealthy in this country.
Here's the harsh reality of Trump's actions:
An estimate from the consulting firm Trade Partnership forecast about 400,000 U.S. jobs lost versus 26,000 created as a result of the metal tariffs.
As if this isn't bad enough, the worst is yet to come as China, Canada, Europe, and Mexico retaliate with tariffs on hundreds of products we count on.

Here's what really fries my bacon...

Republicans in Congress whose states will be most affected by Trump's tariffs are busy imitating jellyfish and not putting any roadblocks on Donny's drive to destroy our economy.

I've heard some meek protests to Trump (kinda like kittens mewing for milk) that his tariffs will harm businesses in their states and make them more vulnerable in the midterms.

It's obvious that Republicans have lost their will to stand up to Trump however, as 90 percent of them continue to enable him.

But, as sure as there's corn in Iowa, soybeans in Illinois, and pork from Virginia, farmers are going to be faced with a crisis of their own - lost business that can't be made up.

I've read that the countries we've alienated are looking at targeting products in states that voted for Trump. In my 67 years, I've never seen, or heard of, anything like this.

It's getting personal as world leaders reject Trump's isolationist policies, and his tariff war on the world.


Time for me to walk on down the road...

Posted by ImBlogCrazy at 6:28 AM