Overheard During 1-on-1 Meet With Kim and Trump: 'Whose Your Hairdresser?' 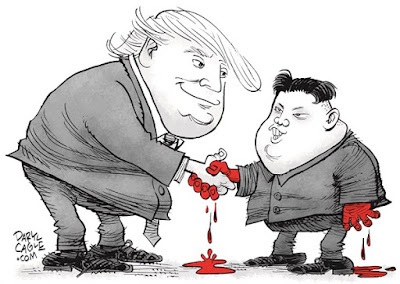 I wish I was a gecko on the wall when Kim and Trump had their private meeting (translators don't count) yesterday.

I can just imagine what it must have been like with those two bullies and egotists trying to outcharm one another. What a dynamic!

Trump: "I love your haircut Kim. Whose your hairdresser?"

Trump: "I can see we're going to get along swell. By the way, did you take a shower today? You smell like bad kimchi."

Kim: "Look whose talking you bloated pig! If my advisers hadn't told me you were a male, I would have thought you're pregnant!"

Trump: "Enough sweet talk you little turd. I need you to give up all your nukes right now. I told my people you would. You wouldn't want to make me out to be a liar would you?"

"By Buddha's balls! You're reputation precedes you Oh Liar-In-Chief. My intelligence people say you lie even more than I do."

Trump: "Listen, compliments won't get you anywhere. I wrote The Art of the Deal, and you should be kowtowing to me any minute now.

Kim: "They told me you were crazy, you old dotard."

Trump: "Everyone calls you crazy, you stuffed little worm."

Kim: "I brought my own toilet. Would you like to lick the rim?"

Trump: You're tactics are weak. And I take back what I said about your haircut! It looks like horrible!"

Kim: "Those white rims around your eyes look like you're an owl that was caught eating Cheetos!"

Trump: How long do you want to go on like this before we go to the next meeting where we'll tell everyone we're making substantial progress, and we'll listen to our advisers like we really care, but we'll do whatever the hell we want anyway."

Kim: "You really do have small hands. Let's show the world how important we are."

Kim knocks on the double doors. They're opened by waiting aides and hopeful negotiators. Kim and Trump try to walk out side-by-side, but the double doors aren't wide enough and there's a tense moment when they're belly-to-belly before they burst out into the hallway.

Camera's start snapping when the two men shook hands and smiled like seals!

Time for me to walk on down the road...
Posted by ImBlogCrazy at 6:26 AM