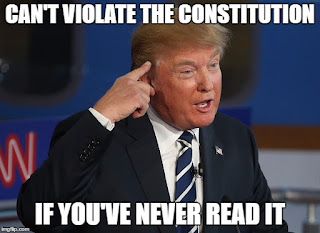 One of the things that has helped me cope with Trump in the Oval Office has been our court systems.

From the lower courts, to the Supreme Court, Trump's attempt's at violating our Constitution have been turned back consistently.

It does appear that Trump is going to win his travel ban today, as Supreme Court Chief Justice John Roberts and Justice Anthony Kennedy have both signaled support for it.

In order to halt the ban one of those two justices needs to support the challengers. That doesn't look likely.

If it wasn't a conservative court the ban would be stopped. But it appears politics is going to infect this decision.

It's an ongoing battle between Trump and the law.

Despite appointing conservative lower court judges, and district judges, it doesn't mean they're always going to go along with a moron like Trump.

For example, we've witnessed the 9th Circuit Court standing up for the rule of law against Trump's efforts numerous times.

Despite Trump's attempts to circumvent our nation's laws, the judiciary system has proven a worthy opponent. The biggest hurdle appears to be partisan poison.