Do You feel Lucky? 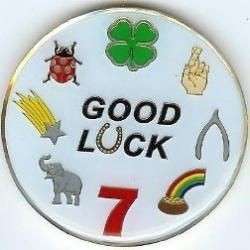 Let's get this week rolling with a question, Do you feel lucky?

I know some people don't believe in luck; attributing all of their good fortune to God, Allah, or Buddha.

I don't mean to harsh anybody's religious beliefs, but there are people who believe in luck.

Seriously though; I believe I'm a lucky person having survived many close calls during my hectic 67 years-in-residence on this planet.

How about you? Is there times in your life when luck lifted you out of a jam?

Alice Hoffman makes a good point about luck; "Here's the thing about luck...you don't know of it's good or bad until you have some perspective."

An interesting example lies in the recent news story about a man who has been bitten by a snake, a bear, and a shark, all in just four years.

He told a reporter that he still wasn't sure if he was lucky, or cursed. I figure he was lucky, because he's here to tell his stories.

A story out of Sandusky, Ohio last week, talked about a real lucky baby boy. Luck can come at any age you know.

A woman was driving by a house when she spotted a 18-month-old baby boy hanging from the roof gutter.

She stopped her car, jumped out and ran up to the house, banged on the door, and then turned around and caught the child as he fell.

In my view, that's lucky.

To be fair, while I don't follow any organized religions, I do believe in a Supreme Being (possibly plural) who isn't burdened with controlling the human race's lucky moments.

You either have good luck, or bad luck. Just don't bet on either one!