The One Subject Trump No Longer Brags About 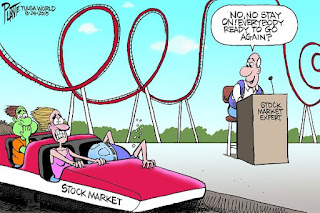 It wasn't that long ago when Trump couldn't go a day without bragging about the stock market, like it was a reflection of his greatness.

When was the last time you heard him mention the current stock market? As in the last few months.

The market has been jumping up and down like an excited kangaroo in 2018. Yesterday, US stocks plunged as investors feared the rising oil prices and costs would slow down growth.

It goes deeper than that however.

Gina Martin Adams, chief equity strategist for Bloomberg Intelligence, recently reported that "The reason we're not seeing a strong recovery for the market is broad economic numbers are suggesting the impact of tax reform was only temporary."

This growing concern over the volatile stock market is heightened by the fact that interest rates have gone up, making it more expensive for companies to borrow money.

As if that's not enough bad news, there's other uncertainties like the possibility of a trade war with the world, and yesterday's announcement that China and Russia have become military allies aligned against the U.S.

The bottom line is Trump no longer believes that the stock market is a worthy reflection of his "yuge" economic success as president.

Which means that he's going to have to depend on fake news from Fox, Breitbart, Infowars, and the ilk, to paint an entirely different picture than what's really happening in America.

Related: 5 Famous Investors Say This Is When The Stock Market Will Crash