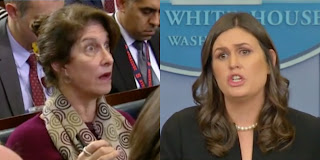 The White House apologizers, aka the Communications/PR Department, is functioning like a ship lost at sea.

At the helm of the tempest-tossed ship is chief WH house apologizer, Sarah Sanders.

After no communications for a week with the mainstream press, Sanders slithered out of her hiding place yesterday to spew a few lies and dodge facts.

In other words, a normal WH Press Conference filled with so many falsehoods reporters are still floundering to make sense of them.

The press conference was an hour late, and Sanders took limited questions, before retreating back to the bowels of the White House.

Obviously, the inhabitants of the West Wing are becoming camera shy. But they do have one friend in the WH Press Corp...

The Gateway Pundit web site, where conspiracies crop up daily, and truth is lost in the shuffle of sensational headlines and claims.

The Trump spin room likes the Gateway Pundit because the publication and it's WH correspondent Lucian Wintrich, love Trump.

Wintrich's hit piece criticizing Florida shooting survivor David Hogg is a fabrication of his fevered mind, and nothing more than another crazy conspiracy story to deflect attention away from the Do-Nothing About Gun Safety White House minions and master.

Trump's announcement yesterday that he's instructing his puppet Jeff Sessions to propose changes that would ban so-called Bump Stocks, which make it easier for a weapon to fire rounds faster, is another delaying tactic.

I wonder how long Sessions (an NRA darling) is going to take coming up with an answer for Donny?

It's was a good soundbite in a week of negative news for the minions of Trump, and the Liar-In-Chief himself.

As for today's planned "Listening Session" with students, teachers, and local lawmakers, you can expect some theatre from reality actor Trump.

Don't expect answers. Expect Trump to make it all about himself somehow. That's the way he operates.

It's about Donny trying to look like he cares. He needs good vibes coming from somewhere. His fantasy presidency is being pushed to the limit by unpleasant realities.

Among them, is the forthcoming truth that the Trump Campaign did collude with Russia in the 2016 election, and Donny knew what was going on.

The WH spin machine is malfunctioning worse than a year ago. Most of the original parts, like Sean Spicer, etc., have been kicked out and replaced with the likes of lying Sarah Sanders, who has no reservations about protecting her master.

Until the spin factory flunkies start using verifiable facts, which is about as likely as an honest politician, we have to accept the fact this will be the norm as long as Donny sits his fat ass in the Oval Office!

Time for me to walk on down the road...
Posted by ImBlogCrazy at 6:56 AM