About The Dopey Olympics, Poor Sportsmanship, and Americans Hating On Americans 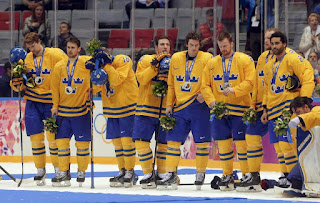 “Sickened & disgusted once again by the lack of humanity that engulfs our country. Lindsey Vonn just raced her damn heart out & Trump supporters gloat/cheer/celebrate her inability to medal. Is this what we've become?” - Julie Foudy
(Swedish Hockey Team Gets Silver. Captain throws it to crowd. Not good enough!)

Yes Julie, Americans were rooting for fellow Americans to fail at the Olympic Games, and it's a damn shame.

First it was Adam Rippon, then Lindsey Vonn, then Gus Kenworthy.

All three dared to speak out critically against the leaders in our country. As we all know, that is about as American as apple pie. Then there's the First Amendment.

Lindsay Vonn got hate-tweets after not medaling in the Super-G.

Because while training for Pyeongchang in St. Moritz, Switzerland, in early December, Vonn said she would not accept an invitation to the White House following the Winter Games. That drew social-media outrage from Trump supporters.

Then there's more doping scandals at this year's Winter Olympics. At this rate maybe they should be called the "Dopey Olympics."

This time, it's (surprise!!) a Russian athlete, bobsledder Nadezhda Sergeeva. What makes this more surprising is two weeks before the Olympics she was seen wearing a shirt that read, " I don't do doping."

Since this is there second Russian athlete who got caught, it is possible that "Olympic Athletes from Russia," won't be allowed to participate in the closing ceremony.

Russian curler Alexander Krushelnitsky was stripped of his bronze medal Thursday after testing positive for the banned substance meldonium.

Olympic freeskier Gus Kenworthy kissed his boyfriend, Matt Wilkas, a quick kiss at the bottom of the hill.


The embrace was caught live on TV by NBC as part of their Olympic footage, quickly went viral. Social media followed that moment with vile posts about gay Americans - and Gus in particular.
When coming in second is not an honor...
Team Captain Lias Andersson was so frustrated with Sweden’s second-place finish at the world junior hockey championship that he threw his silver medal into the crowd.

I don't know about you, but the luster of the Olympic Games has worn off for me. It's just a sad reflection of the world and not the Olympic spirit I grew up with.