Students Nationwide To Speak Out For Gun Safety - Can They Make A Difference? 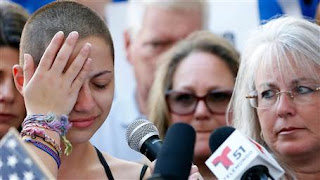 They are trying to do what Congress has been unwilling to do; get sensible laws passed on gun safety, and outlawing assault style rifles (semi-automatic AR-15s).

The "adults" in Washington are going to be schooled by outraged high school students/teachers coordinating a nationwide protest against the NRA.

Lawmakers that are beholden to the NRA because of the political donations they accept, are going to be highlighted during the planned nationwide walkout by students and teachers on March 24th.

Students and teachers are also planning on sit-ins and other protest activities on April 20th - the anniversary of the Columbine massacre that left 12 students and one teacher dead.

Can our nation's students cries of "BS" on the NRA and Republican lawmakers in Congress make a difference? Thus far, each tragic shooting has not produced any changes.

Republicans send their condolences to the victim's families. Democrats cry for reform. It's like watching an evil version of "Groundhog Day."

It's time for students to speak out. They're tired of being silent victims while so-called adults argue about the issue of gun control.

They're the victims, as are the teachers, in this deadly standoff. Students are saying they're tired of being sacrificed in order to get money from the NRA.

Will the upcoming demonstrations shame those weak-kneed and greedy, lawmakers into action?

If history is any kind of yardstick, the protests will happen, but no changes will be made. There will be more mass shootings at schools, and other locations.

Shame is not enough for change. It can only happen at the polling booths.

Florida Students: "You Are Either With Us Or Against Us"