Trump's Parade: Every Good Dictator Deserves A Show Of Strength 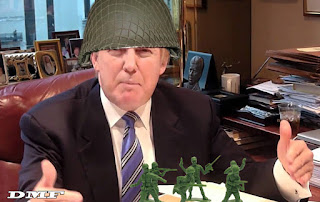 Trump's desire to have a military parade goes back further than his visit to France last year, when he saw the French put on a patriotic parade.

Pundits suggest that after he was done clapping his tiny hands together in glee at the sight of so many troops and military equipment, he told the French president that he was going to have a bigly parade of his own.

While that may be true, let's unfold the rest of the reasoning for Donny's big parade.

Since attending military school while growing up, Trump developed a love of generals and authoritarian figures. He particularly loved military pomp and showy parades.

But, being the chicken-shit he is, Trump avoided the draft five times. That's where he earned the nickname Cadet Bone Spur. 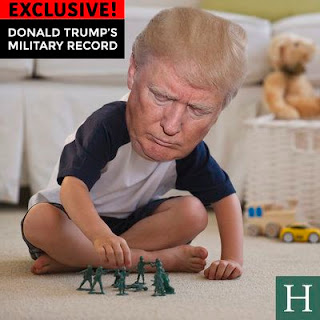 A quick look at Donny's favorite appointees reveal "his generals" who are ready to obey his commands.

Most Republicans and Democrats don't want to have Donny's $30 million (*estimate by Pentagon) dollar parade, and are saying that's the kind of thing dictators - like Putin, Kim, Jiping - do. Not Americans.

Exactly. But Donny doesn't give a shit about what anyone thinks. His ego and desire to see naked power paraded past him - honoring him - has no limits.

His dream is America's nightmare.

Stretching this nightmare out, is those Republicans who'll try to enable him, and give him his parade for partisan reasons.

After all, every good dictator deserves a parade.