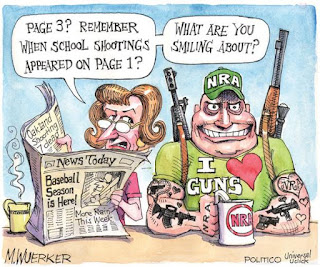 The National Rifle Association has five million members. That's a total of 12.4 percent of all Americans.

According to the latest polls 75 percent of all Americans want more gun safety laws.

The NRA is one of the biggest spenders in elections, ranking 9th among all outside groups, according to the Center for Responsive Politics.

A Quinnipiac poll released Tuesday found 97 percent support for universal background checks, while 67 percent backed a ban on the sale of assault weapons.

Questions for the NRA :

1. How is it that such a small percentage of Americans - spearheaded by your organization - can control Congress and stop any gun legislation from being enacted?

2. Why does the NRA refuse to budge, or compromise, with the majority of Americans who are calling for sensible gun safety laws?

3. Why did you give Trump $30 million dollars? Quid pro quo? The other question is, what did YOU get in return for those millions of dollars?

If you're interested in learning more about the NRA's current lobbying dollars, which congressional candidates got money from the NRA, and more, click here. 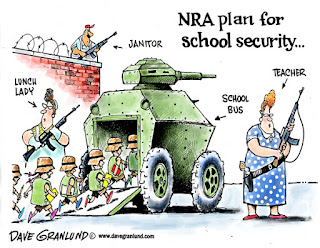 Trump Praises NRA As It Mount's Offensive Against Gun Measures

The NRA tries to mislead people with deceiving statistical figures  like "Forty percent of  Americans live in gun-owning households."

On the surface, that's probably right. Does that mean everyone in those households approve of having guns? Common sense tells us NO.

Many people don't have a choice. They live with other people who have guns because they're minors (with no voice), or out of financial necessity.

Think about it. Because there's one gun owner in a household, it doesn't mean the others approve and count themselves NRA supporters.

Yet, the NRA casually throws out deceiving statistics as cited above, all the time.

The truth is the NRA represents a small (but vocal)percentage of Americans, yet the political power they exert on Congress is overwhelmingly complete.

When was the last time you read about any gun law being passed without the blessing of the NRA? That in itself, is proof of the power this small organization wields.