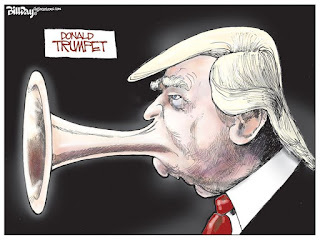 Based upon facts, let's be clear about Trump's recent Asia tour; it didn't produce anything near a treaty, or sell one F-18, during the trip.

Trump was so desperate, it was reported, that he begged the Vietnamese government to buy American military equipment because he needed "a win."

Now that we have that out of the way, let's take a look at what Donny thought about his latest great adventure.

Upon returning to the United States he contacted the media and said he had a major announcement to make. An eager press corps assembled and then listened to him babble for 25 minutes.

No real news. Instead, Trump talked about how nice all the dictators were, and how they all threw him lavish receptions. And, how they loved and respected him.

He bragged about how countries were following his lead on sanctions for North Korea, including China.

However, China made a statement the next day refuting Trump's assertion about changing their sanction policy to go along with him.

A Chinese state department release firmly stated, "We are staying with our current policy."

Trump was really on a military sales junket which he tried to disguise as a diplomatic tour. None of the dictators were impressed with his infamous art-of-the-deal approach.

Instead of strengthening foreign ties, as he claimed in his major announcement speech, Donny made it clear that he wasn't interested in signing any long-term strategy with our allies in the region.

He was on a sales mission for American defense contractors, and didn't secure one major order.