Just What I Suspected: Sessions Has Dementia or... 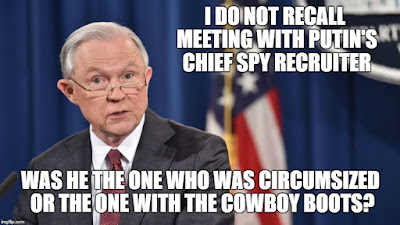 Watching Sessions stumble through his most recent testimony under oath, was a perfect example of what dementia does to a person.

He couldn't remember a damn thing!

When prodded and confronted with evidence, Jeffy's memory improved long enough to remember some things.

Not everything, mind you, but enough to say he turned Papadopoulos's attempt to hook Putin up with The Donald down.

Jeffy was forced to admit (because new evidence showed up) a former aide to Trump's presidential campaign informed him during the 2016 election about ties to Russian officials.

That, of course is in direct contradiction to his own testimony to members of Congress during his confirmation hearing to become attorney general earlier this year.

When not being forced to tell the truth, Jeffy stonewalled the rest of the questions with word salads. And a bad memory.

I believe a memory as bad as Jeffy's qualifies for early - to middle - signs of dementia. I've known people with dementia and Jeffy either has it...or

He's a bigger liar than Trump! How mind numbing is that?