Welcome to the Museum of Morons: Free Tour Today 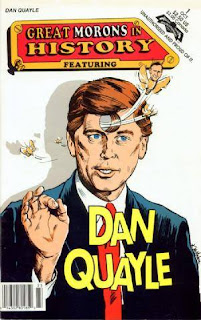 Welcome to the Museum of Morons.

My name is Dave, and I'm the curator. Before we start our tour, let me give you a little backround on the museum's purpose and goals:

A) To show how morons have affected civilizations since ancient times.

B) Top morons in time are featured to help visitors understand the rolls they played in history.

C) Examples of current morons making their mark on society.

Exhibit A - There was Caligula. As the emperor of Rome, he gave rise to the meaning of moron by doing things like naming his horse, Incitatus,  a consul and making him a priest.

Exhibit B - Then there was Muhammad bin Tughlaq, an Indian sultan who wanted to move his capital from Delhi to a city 932 miles away, and forced the whole city to move.

But as soon as he got there he decided to keep the old capital and forced everyone to march back.

Exhibit C - Franz Reichelt was known as the flying tailor in 1912. He made himself a flying suit and got permission from Paris police to test the suit off the Eiffel Tower.

The thing is, he was supposed to use a test dummy. But when he got to the top he decided to test it himself, despite being asked not to, and jumped. The suit malfunctioned and he hurdled to his death.

Exhibit D - When Dan Quayle was the vice-president of the United States he became famous for his moronic quotes and gaffes. To wit:

One of my favorite Quayle quotes: "Republicans understand the importance of bondage between a mother and child."

Exhibit E - The moron's moron award has to go to George W. Bush, ex-president of the United States. Examples:

"Rarely is the question asked, is our children learning?" January 2000, during a campaign event in South Carolina.

"Our enemies are innovative and resourceful, and so are we. They never stop thinking about new ways to harm our country and our people, and neither do we." Aug.5, 2004, at the signing ceremony for a defense spending bill.

I hope you enjoyed this random sampling of morons. The next time you come to this museum you'll get to see our newest exhibit - Donald J. Trump.

And, as everyone knows, he has reached moronic heights during this 2016 election cycle that may never be matched by another person in history again!

I like this idea. Reminds me of an old comic single panel cartoon I Once saw.
"Great Ducks Through History"!
Loved that strip. Love this idea of yours. Excellent work!

I like this idea. Reminds me of an old comic single panel cartoon I Once saw.
"Great Ducks Through History"!
Loved that strip. Love this idea of yours. Excellent work!