Pass the envelope please: ‘And the Worst TV Show of All Time is…’ 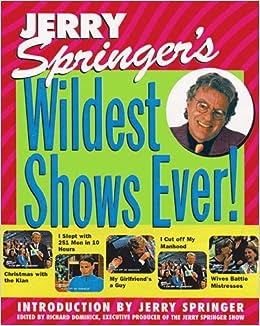 After searching for links about the worst TV shows in history, I’ve come to the conclusion it has to be The Jerry Springer Show.

Here’s the rub; Springer’s trashy show has been on since 1991 and continues to be popular with a certain segment in society.

Basically, the daytime talk show is the epitome of all things tasteless and trashy.

For example, guests on Springer’s show like to break out in fights as they debate the paternity of their children or whether to pursue sexual relationships with their relatives.

The studio audience makes for the loud hum of an angry mob rather than a laugh track, and that noise is interspersed with bleeped-out profanities every other second.

People with sad and pathetic lives go on the show to scream at each other, air their dirty laundry, and not solve their problems in the slightest.

Springer has been referred to as the anti-Oprah, and as long as there are people who want to scream and fight on television, this show will, unfortunately, probably stick around.