What Scott Walker and Andrew Carnegie Have in Common

Presidential wannabe, Scott Walker, has something in common with Andrew Carnegie.

Both thought worker’s shouldn’t have any rights.

In Walker’s latest attack on Wisconsin workers he took away their guarantee of one day off per week. Now employers can force people to work seven days a week!

It’s hard to believe Wisconsin is even in today’s America. Walker, as governor, has turned the clock back more than a 100 years when American workers literally had no rights.

His union busting has helped employers keep wages down to a minimum.

In 2012 Walker took away workers collective bargaining rights. Like Carnegie, he believes workers don’t deserve a living wage, forcing them into an endless cycle of poverty. 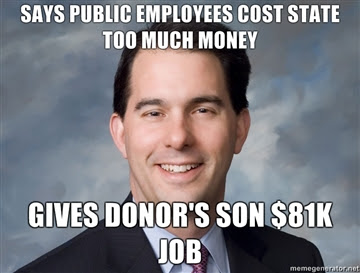 The amendment that Walker introduced dismantled a rule that had been in place since 1927, guaranteeing workers 24 hours off a week. Just another example of Walker administration's efforts to roll back worker protections.

Classical economists saw labor as commodity, to be bought and sold according to market demands. Walker is obviously a follower of that theory.

When Andrew Carnegie saw the move toward cooperation as opposed to competition he lamented “…the destruction of individualism, private property and the law of accumulation is upon us.”

The difference between Carnegie and Walker is that Carnegie finally figured out he’d been a bastard when it came to business and how he treated workers. During the last 18 years of Carnegie’s life, he gave away $350 million to charities, foundations, and universities.

Don’t expect Walker to wise up however. He doesn’t give away money, he collects it, and cronies in the form of PACs collect it for him.