What was humanity’s first conversation about? 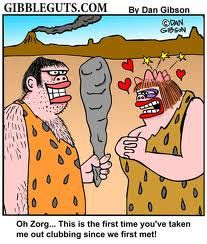 Have you ever wondered what the first conversations among humans were about?

"You're doing it wrong," or a series of grunts to that effect, may have been among the first words used in human conversation, according to scientists studying the development of ancient tools.

In a recent study published by Nature Communications, researchers suggest that language co-evolved with toolmaking.

I believe there were other subjects that rated higher than toolmaking. Think about it.

Can’t you imagine men and women exchanging words of affection long before chipping away at rocks became trendy? They might have even had “pet names.”

“Oh Zorg! What a sweet-talker.” 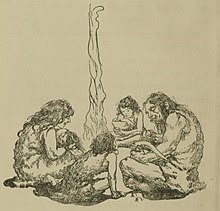 Seems reasonable to me. How about arguments? I bet there was some really nasty name-calling going on long before mankind worried about doing something peaceful, like making tools.

“Oog is ugliest in jungle!” Followed up with a few well-placed rocks for emphasis.

What about basic functions? Don’t you think there were already long conversations about what to use for toilet paper, who to invite for dinner, and if meat should be cooked?

Seriously, the researchers who came up with the conclusion that mankind’s first rap sessions were about making tools, were just guessing.

Some would call it an educated guess (because the authors all have degrees), but until they can produce a recording proving differently, I’ll put my money on “pet names.”