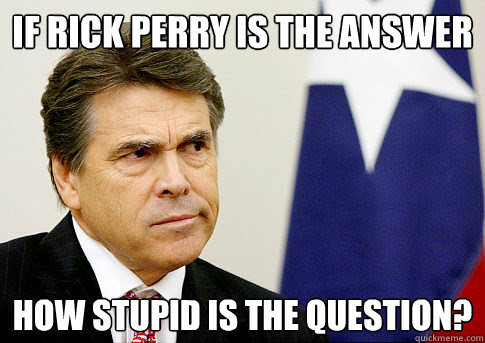 I’ve been reading that you’re thinking about running for president again in 2016. Gotta hand it to you partner …you have gall.

No common sense whatsoever, but you don’t let that bother you.

It also doesn’t bother you that conservative activists complain about your "crony capitalism" way of politics.

Don’t be shy about your accomplishments.

Even though you never talk about it, Texas leads the nation with about a quarter of residents lacking health insurance, and has the country's highest annual total of workplace fatalities nine times during your tenure.

Your administered incentive funds have been savaged by state auditors. They found that The Texas Enterprise Fund, was offering deal-closing money (it use to be called bribes) to top business and employers.

Fact: $222 million was awarded to 11 firms and universities that either didn't apply for the funding or weren't required to directly create jobs.

I mean, what’s this all about? Sounds kinda shady, don’t you think?

How about your famous "oops?"

In the midst of a 2011 presidential debate, you were unable to recall the third of three federal agencies you’d promised to shutter, finally muttering "oops."

There’s more reasons why you shouldn’t even consider running for president.

To refresh your memory: In August, an Austin grand jury indicted you for abuse of official capacity and coercion of a public servant. A felony indictment is not a calling card for being the next leader of the free world.

Your energies are better off spent defending yourself against this indictment, and the numerous accusations of crony capitalism coming from both parties.

PS – With Jeb Bush, and now Mitt Romney, throwing their toupees into the fray, you can forget about coming close to competing on the campaign trail.