It’s no longer a debate: Florida is the weirdest state! 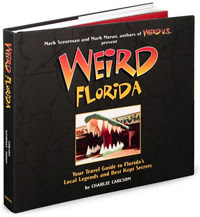 Florida is a state where people will stick just about anything in their pants — if they're even wearing them at all!

Eliot Kleinberg, a Palm Beach Post reporter who is the original weird Florida archivist in what now seems to be a popular trend, says he often issues the challenge to anyone to prove another state is weirder and he's never lost an argument.

"The world has come to acknowledge Florida's weirdness. It is no longer a debate," said Kleinberg, who published Weird Florida in 1998 and Weird Florida II — A State of Shock in 2006.

It's the state where the annual Chumuckla Redneck Christmas Parade was canceled because — big surprise — attendees kept drinking too much in previous years.

And it's the state where a woman wearing a Catholic Warrior shirt was charged with criminal mischief after damaging a Satanic Temple holiday display at the Capitol. A security camera picked up the offense.

Which is different than the tantrum picked up by a Tampa-area McDonald's security camera: a woman walking behind the counter wearing nothing but a thong overturning equipment, throwing food, and eating ice cream and French fries.

Three naked men were caught on a security camera breaking into a Bonita Springs restaurant and stealing 60 hamburgers, three pounds of bacon, three red peppers and a paddleboard.

Even when Floridians kept their pants on, they stuffed odd things in them, especially in DeLand, where a woman was charged with stealing seven frozen lobster tails she stuffed down her pants and a Wal-Mart security guard caught a man with two packages of cow tongue in his pants.

There was also a man in Port St. Lucie who stole a chain saw by sticking it in his pants.

That wasn't the only dangerous thing found in people's pants. A corrections officer reaching for cash at a Fort Lauderdale restaurant accidently fired his gun. The bullet shattered when it hit the floor and fragments hit a dozen people.